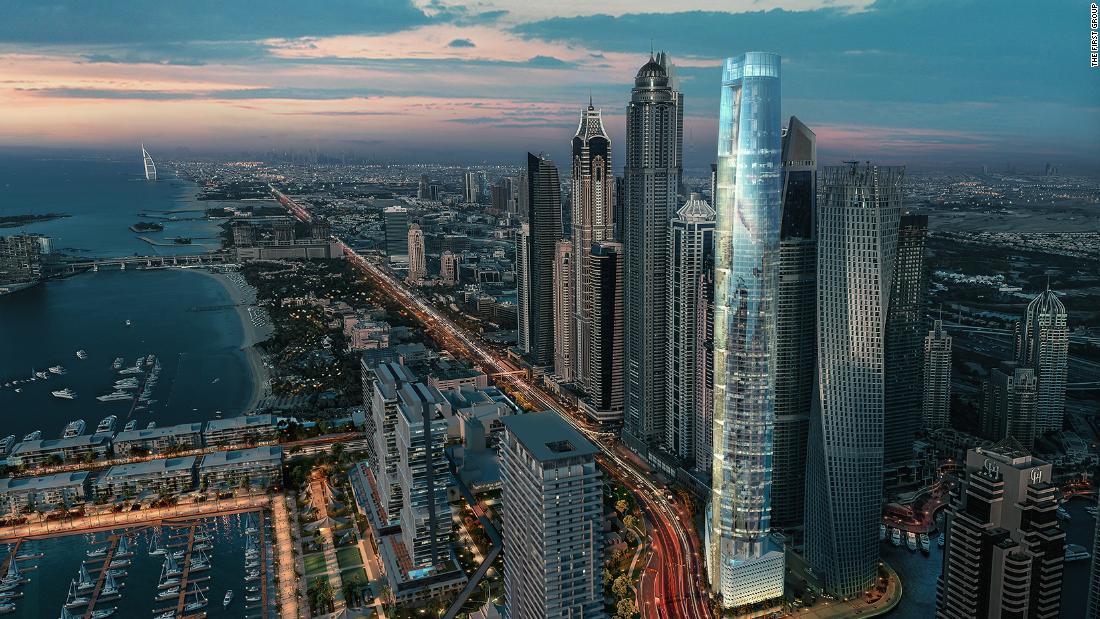 But the Gevora’s reign will be short-lived. The 75-story tower is to be eclipsed by a slender glass skyscraper under construction just a short drive away in Dubai’s Marina district.

The Ciel Tower will reach 360.4 meters upon completion, developer The First Group has confirmed, featuring 1,042 rooms and suites spread across 82 floors.

The design from architects NORR, creators of the Atlantis, the Palm hotel, seeks to maximize the value of such altitude.

Ciel Tower comes from the architecture firm that created Dubai’s iconic Atlantis, the Palm hotel on the man-made island of Palm Jumeirah.

A glass observation deck will offer 360-degree views of the city. Visitors can also take in the sights from a rooftop swimming pool and restaurants.

Guests will experience “panoramic views of the coastline and iconic landmarks including the Palm Jumeirah (man-made island),” a spokesperson for The First Group said.

Ciel Tower will also feature a spa, business facilities, and “multiple award-winning restaurants” which will be announced in the coming months, the spokesperson said.

Construction work has been ongoing since 2016 at the building site in Dubai Marina, a major hub of development featuring a cluster of supertall skyscrapers including the 306-meter (1,004 feet) Cayan Tower and 425-meter (1,394 feet) Marina 101 building.

The title of tallest hotel is typically applied only to buildings used wholly as hotels. However, the highest hotel incorporated into a building is currently the Rosewood Guangzhou, which occupies the top 39 floors of the CTF Finance Centre in the Chinese city, reaching 530 meters (1,739 feet) at its summit.

The First Group will seek formal certification for Ciel Tower as the tallest hotel in the world ahead of its opening date.