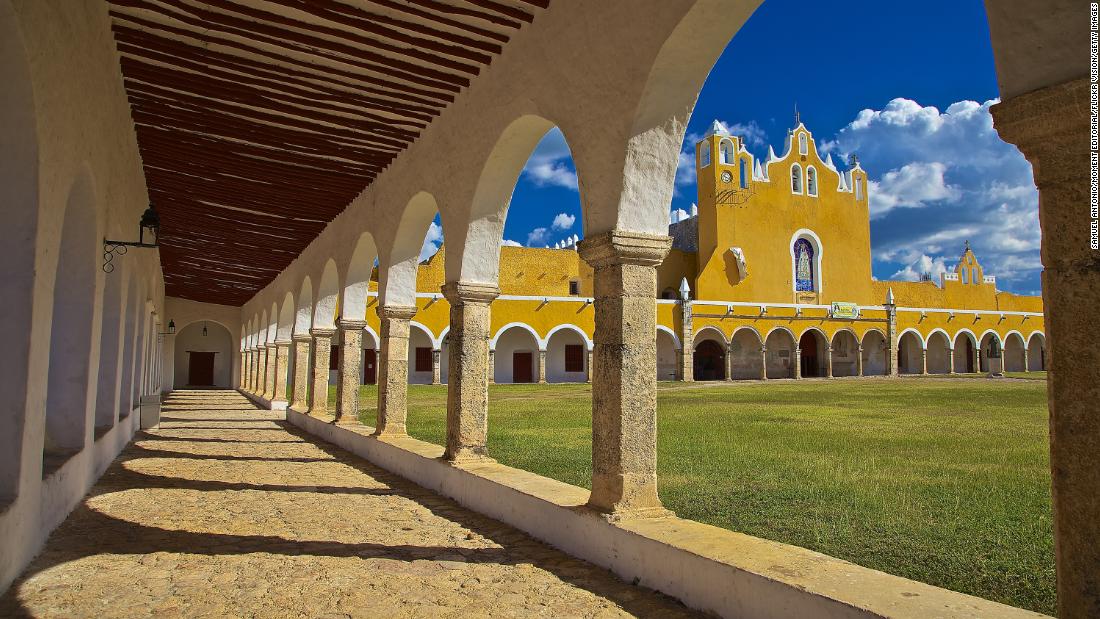 (CNN) — No matter which direction you travel from, there’s a ramp-up of vivid blue, yellow and even orange hues on buildings and structures before you actually enter the town of Izamal, Mexico.

But you will know that you have arrived when you’re surrounded with golden-yellow walls on every building on every street.

Nicknamed “La Ciudad Amarilla” (or “The Yellow City”), Izamal is a small town in the state of Yucatan. The name Izamal means “dew that falls from the heavens.”

The reason for the sunny color remains unclear.

“When I first started guiding, I had been told that it was painted yellow in honor of the visit of Pope John Paul II in 1993,” said Julia Miller, a local archaeologist and tour guide. “So, I very faithfully repeated this for years until I said this in front of another tour guide who said, ‘No, it wasn’t! It was already yellow.’ ”

After asking around, Miller concluded that no one really knows why it was originally painted yellow.

Izamal, known for its bright yellow buildings, is one of Mexico’s “magical towns.”

Izamal is one Mexico’s “Magical Towns,” or “Pueblos Mágicos.” It’s a program the government developed to preserve Mexican destinations with special cultural histories.

A steady stream of visitors who are typically going between Mérida and Chichén Itzá visit the town. It rarely seems too crowded or touristy, and the locals are very present doing the typical things of their daily lives.

Izamal was founded nearly 2,000 years ago by the Maya. It is believed that the town is named after the ancient Mayan god Itzamná.

“The Spanish city was founded in the 1550s and because it was an important pilgrimage place for the Maya, the Catholics decided that it would be a good place to put one of their first churches on the Yucatan Peninsula,” said Miller.

The Catholic church is called the Monastery of St. Anthony of Padua, built in 1561 on top of the existing ancient Mayan worship center. It was originally a place used to convert the Maya people to Catholicism.

Today this church is still active and is one of the oldest Catholic churches in the Americas.

While the church is the biggest draw, Izamal is also known as a town with three cultures because it holds the history of the ancient Maya people, along with Spanish colonial history and today’s modern population.

Just a few blocks from the church is Kinich Kak Moo, the largest Mayan ruin remaining in Izamal.

Named after the Mayan sun god, the 35-meter (115-foot) pyramid has 10 levels. Adventurers can climb the pyramid’s uneven and steep steps for the reward of 360-degree views of Izamal, the surrounding jungle and the vast Yucatan beyond.

And because the town isn’t overrun with tourists, odds are good for experiencing the pyramid in solitude.

There are four other ruins in Izamal that are all free and easy to explore on foot.

The town’s signature sites can be visited within a few hours, but renting a private hacienda is a great option for more leisurely overnight stays.

At Casa de Los Artistas, the yellow theme is carried throughout a beautifully decorated estate showcasing local materials alongside modern touches. Behind unassuming doors, there are six luxurious suites with full bathrooms, a private pool and panoramic views from the three rooftops within the property.